A re-elected Andrews Labor Government will create up to 50 new jobs in the Latrobe Valley with a new government agency, Solar Victoria, to be based in Morwell.

Solar Victoria will be responsible for rolling out Labor’s new Solar Homes program, which is putting power back into the hands of Victorians and cutting electricity bills with solar panels or solar hot water systems for 710,000 homes over the next 10 years.

Solar Victoria will work with industry, regulators and training organisations to deliver the $1.3 billion program.

This includes providing information to households about eligibility, how to access rebates, how to find an approved installer and which approved products can be installed, as well as providing advice to industry on accreditation and auditing programs.

A re-elected Labor Government will locate Solar Victoria at Morwell’s new $25 million GovHub building. Construction of the GovHub building at 65 Church Street will start later this year, creating 100 construction jobs and housing up to 300 workers when it is completed in 2020.

The new Solar Victoria jobs will be in addition to the 150 Victorian public service workers from Parks Victoria, the EPA and Earth Resources Regulation who will also be based at Morwell GovHub.

Local households will also be able to save on their electricity bills under Labor’s Solar Homes program by either installing half-price solar panels with an interest free loan or getting $1,000 off the cost of a solar hot water system via a rebate.

Victorians are eligible for the program if they have a household income of up to $180,000 and live in their own home valued at up to $3 million.

Labor’s Solar Homes program will create around 5,500 jobs, save Victorians more than $500 million a year on their electricity bills once the program is complete and generate 12.5 per cent of Victoria’s target to generate 40 per cent renewable energy by 2025.

Find out more at danandrews.com.au.

“Victorian families are fed up with big corporations price gouging and ripping them off ever since Jeff Kennett and the Liberals sold Hazelwood off and privatised our electricity.”

“Our unprecedented investment in cheaper, more reliable energy will boost jobs in the Valley and across Victoria.”

“Making Morwell the home of Solar Victoria will also bring up to 50 additional jobs to the Latrobe Valley as part of our ongoing transition and development work across the region.” 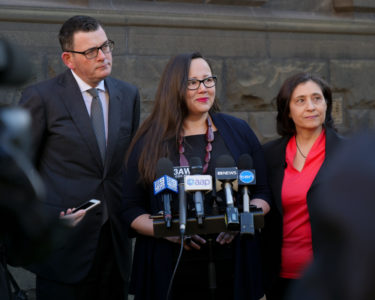