Minister for Public Transport Jacinta Allan announced that from 1 March, regional passengers who buy a 28-69 day myki pass will pay the same reduced rate as those on a 70-325 day myki pass.

The changes could save Gippsland transport users up to $1,482 per year.

The fare reduction of between 1.5 and 27.1 per cent will benefit around 13,500 regional customers who currently purchase a 28-69 day pass at least once a year, and make the regional myki pass offers fairer for passengers.

It also ensures regional customers can access a higher level of discount for less money.

Regional customers who hold a current 28-69 day pass will be reimbursed the difference between the price they paid and the new reduced price for travel taken after 1 March.

This change is in addition to a range of fare improvements brought in by the Labor Government, including free off-peak travel for primary school groups, free weekend travel for Victorian Carer Card holders across up to two consecutive zones and changes to the child age range that mean children don’t need a myki until they’re five.

For more information about the fare changes see ptv.vic.gov.au.

“This will make a big difference for Gippsland passengers who travel every day, by providing savings of up to $1482 a year.”

“Gippsland’s public transport users deserve decent public transport and these savings are part of a range of initiatives we are introducing to make our system simpler and cheaper while other much-needed network improvements continue.” 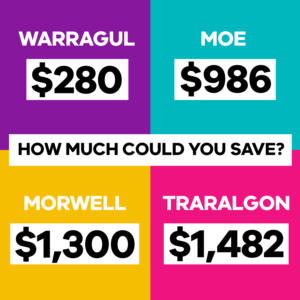